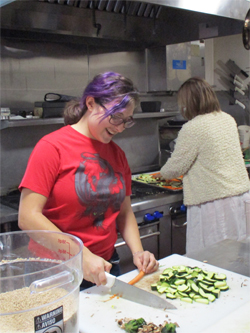 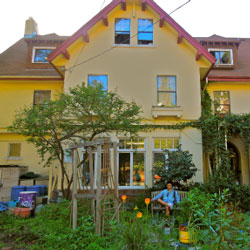 Kingman Hall, aka Toad Hall, when the weather is just so, is something of a resplendent Victorian manor lodged in the red wooded hills of North Berkeley. Ivy and Morning Glories creep along the sides of the house. It is a mere one block tumble from campus and the windy walks of the Rose Garden. A forest, a garden, a study, a place of vibrant, beaming, and charmingly sordid history, it is a local landmark; birthed as a turn of the century fraternity house, with running stints as a sixties counterculture epicenter and the infamous Living Love Center. Kingmanites (Toadies in moments of whimsy) are a languorous bunch: shameless gourmands given to homemade salsa and hummus, which is eaten in our frothing front gardens or glistening remodeled dining room upon our amoeboid dining table. We gather for expansive sunsets on the roof deck and contemplate the sprawl of the bay coast and its metropolis. Other times we retreat to the serene caverns of our backyard amphitheatre, roofed by redwood branches, ringed by blackberry bushes, and run through with a deviant tributary of Strawberry Creek.

Nerds and hippies, carnivores and vegans, gentle techies and adamant floralists, the studious and the fanciful, the puritanical and the boheme, every crosscut thereof, all find home in the flux of the great Kingman Hall. We pass the legends of those who came before, feast mightily, and make merry in elaborate festivities.